Shooting the Moon, for folks who don't play "Hearts"

Today's post comes in response to a comment on the last entry about shooting by the light of the moon:

"Hey Paul! Thanks for setting up the Q&A! I was awed by the night sky on 02/26/12 when Jupiter and Venus came very close to a beautiful crescent moon. Hurried outside to take a picture only to find out I don't have the skills for such a feat yet! I was wondering if you could give me some starting points for taking such a shot. Apparently I will get another opportunity on 03/13/12, I want to be locked and loaded then...
Thanks so much for the advice but especially for the super helpful blog. Hoping to join the badass mofotographers one day."

Thanks Cintia for reading and getting involved.  Welcome to the Foto Mofos.

A true mofotographer always has his/her tripod, and that's just the most important detail to remember when doing any kind of low-light shooting, and shooting the moon is no exception.  Yes, it's possible to aim your camera right at a full moon with a very long lens (300mm or greater) and take a hand-held shot at a reasonable ISO setting, but with anything less than a full-moon, you will find that you'd be better off with a tripod, or you'd have to use a high ISO setting to avoid camera shake, and the resulting image quality would be compromised.  It's amazing how much more light there is with a full moon than with a half moon, and certainly a crescent moon.  The human eye tends to adapt to different brightnesses very well, so there doesn't seem to be as much apparent difference between the various moon phases, but a camera never lies.

Another interesting thing about the moon and our perception of it is how when we look at a real-life scene that has the moon in the sky, the moon always seems to look much bigger than it does when we photograph that same scene. If you've ever photographed a scene using a wide angle lens, you've been disappointed that the moon looks no bigger than a street lamp!  So the point to remember is that to take a picture of the moon with any amount of detail, you need a super-telephoto lens.  I'd recommend a 300mm or greater lens.  I usually use a 400mm focal length on my Canon 7D body.

Another tool I like to have hand for night shooting is a cable shutter release.  This allows me to fire the camera on the tripod without actually touching the camera body.  This prevents the possibility of causing excessive camera shake.

It sounds like Cintia's ambition was to take a picture of the moon with Jupiter and Venus isolated in the sky without any earthly landscape in the composition.  So here's a quick and dirty mofotographer-style take on how I'd photograph that.

An uncropped, unedited capture of the full moon in the night sky would like this: 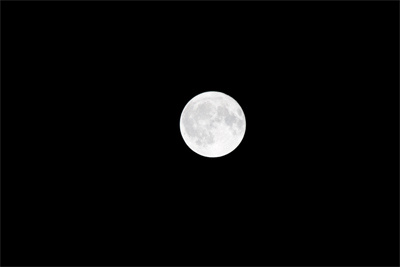 Expect that a crescent moon would require one or two more stops of exposure.

OK, now for the mofo part:

What's even more fun than photographing the moon is incorporating the moon into a landscape photograph.  After all, a moon is a moon is a moon, and it kind of lacks character without some earthly features to put it into context.  But most landscapes are taken with wide angle lenses, and like we said at the beginning, the moon looks like such a wimp through a wide angle lens -- small, lacking in detail, and if you're properly exposing for a night landscape, the moon is no doubt overexposed.  NOT badass.  If you've tried it, you know what I mean.  So how do we make the moon look like it does, perceptually, to our eyes?  WE CHEAT!  Actually artists never cheat, only scientists cheat.  Artists have no rules, and when there are no rules, it's impossible to cheat.

So how do we cheat?  We take two separate exposures and combine them:  Capture the landscape using your wide angle lens; Then take an entirely separate capture of the moon isolated against the sky using your super-telephoto lens.  Then once you're at home in the comfort of Photoshop, crop the moon shot down so it's just a square that includes the moon.  Layer the moon shot over the landscape shot, and scale down the shot of the moon so it looks perceptually the size that it did to your eyes.  Or if you have a flair for the dramatic, make it a bit bigger. ;)  At this point you'll see that the moon still has an ugly black box around it.  So, this is the most important part: Change the blending mode of the moon layer to "Lighten" or "Screen" depending on which one looks better.  These blending modes will make the dark part of the moon layer become transparent, and thus match the color of the sky in your landscape shot.  Amazing!  It looks seamless, really.  Mofo-licious! 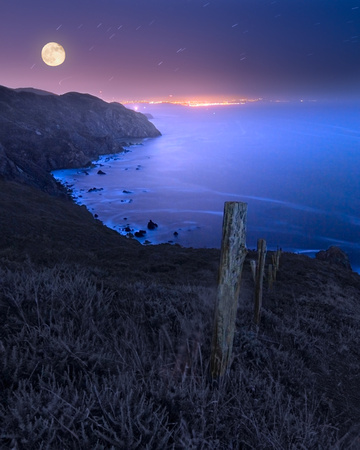