The Hyperfocal Focusing Technique: how to maximize depth of field for easy landscape photography

Whenever you are photographing landscapes, like a good landscape shooting mofotographer, you almost always want to get the maximum depth of field possible; you want everything from near you all the way out to the horizon to be in sharp focus.  There is no room for fuzzy, blurred backgrounds in this kind of photography, as there would be in, for instance, portrait or close-up photograpy where only the main subject needs to be rendered in sharp detail.

We've learned in Photo 101 that the higher f-stop numbers (corresponding to smaller lens apertures) give the most depth of field.  And most of your landscape photography will be done with wide-angle lenses, which naturally have more depth of field at any f-stop than telephoto lenses do.  So achieving maximum depth of field when shooting landscapes could be as simple as setting your f-stop to a high number, like f/22 or above, and focusing on just about anything in the scene, and you'd almost guarantee that everything in the scene is in focus.  But, if you are to be a true mofotographer, there's a slight problem with that:

Most lenses, even many higher-quality ones, tend to suffer from some kind of image degradation at their extreme apertures (either the very high or very low f/stops).  A lens that is opened up to its widest apertures (lowest f numbers) often produces soft images, because the depth of field is so small.  And a lens at its narrowest apertures suffers from a image-degrading phenomenon known as diffraction, which, in my non-technical mofo way of describing things, is caused by rays of light being dispersed by the blades of the lens diaphragm (the part that regulates the aperture), leading to a reduction in resolution.  So that leaves us with the idea that the optimum, sharpest, apertures to shoot at are the middle ones -- f/8 to f/11, and if you would like to push it, f/16.

So how do we shoot at the naturally sharpest apertures while still maintaining the maximum possible depth of field?  Be prepared to take your camera off of autofocus for the next step of your progression from ordinary photographer to Supreme Mofotographer Extraordinaire.  And besides, so much of landscape photography is done in low-light conditions, and most autofocus systems won't be able to focus on anything when it counts anyway.  So you'd better be prepared to rely solely on manual focusing.

An important point to remember is that the hyperfocal distance also happens to be the absolute closest distance at which you can focus the lens and still get objects at infinity within the depth of field.  In the above example, if we focused closer than 27.6 inches even slightly, down to 27.0 inches, objects at infinity would no longer be in focus!  The depth of field would drop drastically, extending from 13.53 inches to about 485 feet.  While 485 feet is still quite far away, it ain't infinity, and so objects on the horizon would be considered out of focus.  On the other hand, if you focus at any distance beyond than the hyperfocal distance, infinity would still be in focus, but you would lose some depth of field at the near end, usually an insignificant amount if you don't go too far beyond the hyperfocal distance.  So continuing with above example, if we set our lens' focus to 36 inches, our depth of field would extend from 15.5 inches to infinity.  We'd lose just a few inches of depth of field on the near end and still have depth of field to infinity.  The moral of the story then, is that it's much better and safer to focus beyond the hyperfocal distance than to try to focus right at the hyperfocal distance and risk accidentally focusing closer.  Given how imprecise manual focus is anyway (because distance marks on the lens are in whole feet, not inches), I always consider the hyperfocal distance to be a minimum, and I focus liberally beyond that.  In the example scenario of our 12mm lens set to f/11, where the hyperfocal distance is 27.6 inches, I set my focus to be somewhere between 36 and 48 inches, and I've got more than enough depth of field for almost any landscape shot.  If I do happen to have subjects even closer to the camera than 18 inches or so that I need to have in focus, or I just want to add an extra security blanket, I then sometimes close down the lens aperture a bit, to f/13 or f/16, and that guarantees me even more depth of field. Remember that the scene, when viewed through your viewfinder, will not appear to be in focus from near to far, because the viewfinder image is produced with the lens at it's widest aperture (which gives the least depth of field).  You have to use your depth of field preview button to see what the image will look like at the f-stop you've actually dialed in.  If you do enough landscape photography, you will just start to trust the numbers, and you won't need to use the preview so much.

You will generally only be using the hyperfocal focusing method with wide angle lenses, because with telephoto lenses, the hyperfocal distance is quite far away, and so the depth of field on the near end also starts quite far away.  Not practical for landscapes where you want the foreground objects to be sharp.  That's okay, because you'll be doing most of your landscape photography with wide lenses anyway.

Okay, so you're probably thinking, "this was supposed to be easy, but this mofo is going to make me solve mathematical equations.  I just want to go out and take frickin' pictures!!"  Just relax.  I'm not a mathemetician either, so I don't do my own hyperfocal distance calculations.  And most photographers don't like to do math either.  In the days of yore, photographers would rely on pre-made tables of hyperfocal distances and depth of field for lenses of different focal lengths.  Now, we simply rely on the omniscient tome of knowledge known as the internet.  There are numerous websites out there that can calculate your hyperfocal distance and depth of field for you, one of which is here: http://www.dofmaster.com/dofjs.html  You enter your lens' focal length and the f-stop you've chosen, and the calculator figures out your hyperfocal distance.  And if you enter the focus distance you've set on your lens, it calculates your total depth of field and your near and far focus limits.   An interesting tidbit of knowledge here is that since depth of field is a function of lens focal length, focus distance, and f-stop, it is consistent across all lens brands.  So it doesn't matter if Nikon, Canon, or Uncle Ned made your 12mm.  The calculations work.

And for smartphone users, we have (drumroll)... apps!  I use an Iphone, and I rely on two apps for hyperfocal focusing: one called "f/8" and another called "Depth of Field Calculator", which do the same calculations as the website above.  If you use an Android phone, check to see if these are available, or else something equivalent will exist surely. 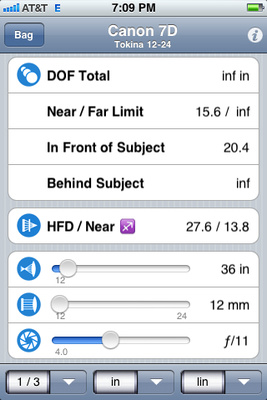 This app called f/8 is cool because it lets you create a virtual "camera bag" with different lenses, including zoom lenses, and you can use a slider to move across the entire focal range of your zoom lens and see how the hyperfocal distance and depth of field change.  The slider feature overall, though, is sort of annoying, because on the touch screen, the sliders are very sensitive and it's difficult to keep them to stay on the number you've set when you move your finger away. 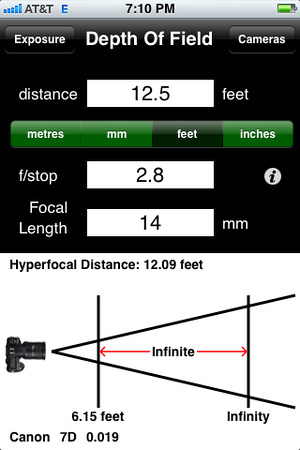 This other app I use, simply called Depth of Field Calculator, makes you input the numbers manually instead of using tricky sliders.   This is both good and bad, because manual entry allows you to easily input the exact number you want, but at the same time, you don't get to zip through all the different focus distances from near to far to see how the depth of field changes as you would with sliders.  The visual representation of your depth of field here is a nice perk, though.

As usual, there's no clear-cut winnter, and I choose to use both apps depending what I need at the time.  The nice part is that as you do more and more shooting using manual focus and hyperfocal distance, you will no longer need to refer to these calculations every time, and you'll have memorized a few key settings that you will use often.  After all, you don't want to miss the few golden moments of a beautiful sunrise because you were staring down at a smartphone, do you?  For me, the one combination of settings on my Tokina 12-24mm lens that I use the most is this:  12mm, f/11, focused to approximately 40 inches.  With these settings, I know I'm using the sharp part of my lens' aperture range (f/8 to f/11), I can be sure that I'm beyond the hyperfocal distance of 27.6 inches, and I have depth of field from 16 inches in front of my camera to infinity.  If I think that I need just a few inches more depth of field in the foreground to get everything in focus, or want to be safe, I go down to f/16.  With a good lens you will not notice a loss of resolution at f/16 vs. f/11.

So, mofos and mofitos, let's go shooting.  Here are your key points to remember:

*And now for the stuff we don't really need to care about:  There's of course some subjectivity in determining what is "sufficiently sharp" when deciding what falls within the depth of field of a photograph, and in reality there is no abrupt transition between sharp and blurry, but rather a gradual transition.  Calculations of hyperfocal distance and depth of field use a concept from physics called "circle of confusion" that sets an agreed-upon numerical upper limit on what should be considered sharp by a person of typical visual acuity, under typical viewing conditions, etc.  I won't go into detail, because I don't understand it fully myself (dammit Jim, I'm a photographer, not a mechanic), but basically the part of an image that is considered sharp falls under the circle of confusion number.   The agreed-upon circle of confusion changes with the size of the camera's sensor/film.  So when you are using a depth of field calculation website or app, be sure to correctly enter your camera body into the program to be sure that your calculations are being done with the correct circle of confusion number.

KimTice!(non-registered)
Are mofitos small mofos or female mofos? I like the idea of small mofos, which in some cases could also be female. But if they are more specifically supposed to be female mofos, shouldn't they be called mofitas?

I'm loving the blog, by the way. Thanks for compiling all this information for us wannabe mofos/mofas/mofitos/mofitas!
No comments posted.
Loading...
Subscribe
RSS
Recent Posts
The Hyperfocal Focusing Technique: how to maximize depth of field for easy landscape photography Shooting the Moon, for folks who don't play "Hearts" By the Light of the Moon And so the Mofotographers Blog begins...
Keywords
how to moon distance focus focusing hyperfocal technique zone photograph castle
Archive
January February March April May June July August September October November December
© Paul Nguyen Photography
User Agreement
Cancel
Continue